The Bearspaw Historical Society Four Schools Oral History Project began in July, 2012. The focus of the project is to learn about the history of the Glenbow, Bearspsaw, Glendale, and Westminster Schools, and the rural way of life in the area in times past. You can read more about the project in the article “From Inkwell to Pen” that appeared in the September/October 2012 issue of The Vantage Point, a magazine produced by Rocky View County.  Click here to download the article. The school district numbers are shown below. 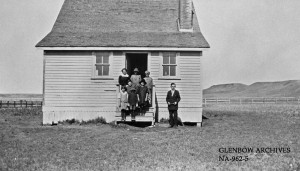 Glenbow School operated from 1911-1914, 1922-1928. The school was moved and used as a house that is still in the area today. The original location of the Glenbow School can be seen in the beautiful Glenbow Ranch Provincial Park. (Glenbow Archives NA-962-5) 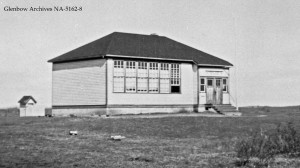 The first Glendale School opened in 1910 and an addition to make it into a two room school was added in 1929. The school was destroyed by fire in December 1932. A different location was chosen for the new one room Glendale School that was completed in 1933. It closed after the 1960-61 school year. (Glenbow Archives NA-962-5) 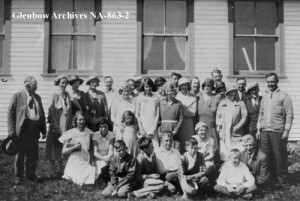 We would like to hear from former students, teachers, trustees, or anyone who has photographs or documents related to the schools. Here are some ways that you can participate in this project, and by doing so, will help us to document the history of the schools and the rural way of life in times past.

• Be interviewed:
Share your experiences as a student, teacher, or trustee by being interviewed by a project researcher. The interviews can be done in person or by phone.

• Send us your memories in writing:
Do you have some favourite memories of your time associated with these schools, or of what it was like growing up in these areas? If so, then please consider sending us those memories in writing. They need not be long as a contribution of one or two paragraphs or pages would do.

• Photographs:
We need photographs that show school activities and scenes of family life, farming, or community events that depict the rural way of life in the former Bearspaw, Glenbow, Glendale, and Westminster School districts. We can accept your photographs in two ways:

Copying photographs:
We can make scans of your photographs either in your home or at the historic Bearspaw School.

Donate photographs:
We would be pleased to accept donations of original photographs and negatives for our collection. Our collection will eventually be donated to an official archives so that the images will be preserved for future generations to use and enjoy.

Donate documents:
We are looking for documents such as school attendance registers, school or trustee meeting minutes, teacher reports, letters from the schools to the families, school projects that you made as a child, or report cards? If so, then we would like to hear from you.

Examples of Existing Donations
The Society has been fortunate to make copies of, or receive the originals of, the following items.
• Gertie Hawkwood donated an original 1920s diploma that was presented to her husband Tom in the 1920s when he graduated from Bearspaw School. She also donated a “Health Rules” lesson book from the 1930s. 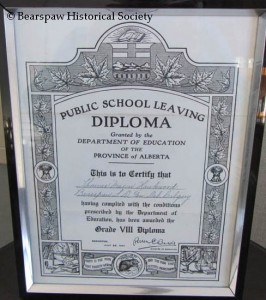 • Tim Bancroft donated an autograph book that was given to each student by teacher Wilf Bennett in 1934.

• Angus McKenzie allowed us to scan many wonderful photographs from Glendale School, and to photograph a painting that he made of the school.

Thank you to all of those people who donated items!

The Bearspaw Historical Society greatly appreciates the support of Ro.cky View County, the Government of Alberta through the Alberta Lottery Fund, and the Alberta Historical Resources Foundation