The Bearspaw Historic One Room School Complex represents the buildings and styles of architecture that were associated with this type of early school in Alberta. There are currently three buildings – the original 1920 one room school, the original teacherage, and a near replica of the horse barn. Plans are in place to build replicas of the boys and girls outhouses. 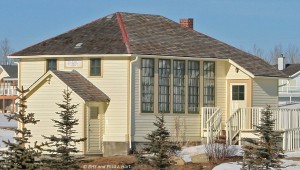 The Bearspaw School District No. 3851 was formed in 1919 and the school was built in 1920 for $2400.00. The school is 22′ x 30′, has its original maple floors, bevel siding, and shingle roof. Over the years the school was heated with a woodstove, a wood and coal burning furnace, and an electric furnace. During the colder months, one of the older male students was paid to arrive early and warm up the school. Another student hauled drinking water from a neighbouring farm. Sunlight was the primary source of light. A basement was added to the school in 1936, and an exterior door to the basement was installed along with a porch to cover it. 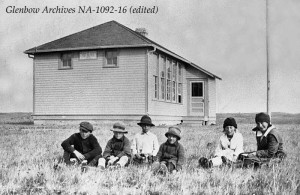 The school was little used after it closed in the mid-1960s and was sold along with the land to the Bearspaw Lions Club. The Bearspaw Historical Society was formed in the 1970s with the mission of finding a way to preserve the old school which had fallen into disrepair. The Lions Club needed the land that the school was on to make room for their very successful farmer’s market. In 2002 the Bearspaw Historical Society moved the school from this location north of the 1A Highway to its current location less than a kilometer away on Municipal Reserve Land provided by Rocky View County. It is across the street from the Bearspaw Lifestyle Centre and new Bearspaw School. A walkout basement with an office was added to the school so that the Society could generate income for operating expenses from the office rental.

Left to right: Preparing the new site for the school, and the historic school being moved a short distance to its new site at 253253 Bearspaw Road in September 2002. (© Roger Pilkington)

Before and after photos of the renovation. Left to right: The school at the original site in need of renovation and at the new site on top of a walkout basement. (© Roger Pilkington & Elisa Hart)

The school interior before and after being renovated. (© Roger Pilkington, © Elisa Hart)

An opening ceremony for the school took place in November 2004. The process of moving and renovating the school took thousands of volunteer hours as well as financial and in-kind support from various businesses. Funding was provided by Rocky View County, the Alberta Lottery Fund through the Alberta Historic Resources Fund and the Community Facility Enhancement Fund. The Bearspaw Historical Society is very grateful to the many individuals and organizations that contributed to the moving and renovation of the school. The school and other buildings are an example of adaptive reuse as they have been modified to serve the community in a new way.